North Camp is an area to the South of the Parish of Farnborough. In 1853 the Government, encouraged by Queen Victoria and Prince Consort Albert, took the decision to build a permanent camp in the vicinity of neighbouring Aldershot for the training of the army. In 1854, the land was purchased and plans were drawn up to erect wooden barracks on the east side of the turnpike road, now the Farnborough Road. The area between the Basingstoke Canal and Aldershot was known as South Camp, with North Camp being on the Northern side of the Basingstoke Canal up as far as Lynchford Road. North Camp lay within the boundary of the parish of Farnborough.
The urgency of preparing the camp for the influx of military personnel needed for fighting in the Crimean War necessitated employing many civilians to undertake the construction work. Labourers walked many miles each day to obtain this lucrative work, and enterprising shopkeepers set up businesses on Lynchford Road to help them spend their money. This in turn led to the building of accommodation for both the labourers and the shopkeepers and the extended area of the North Camp became the village as we know it today.
The large numbers of soldiers requiring food and entertainment opened the door to the establishment of beerhouses, provision merchants, saddlers, tailors and ironmongers. At one time there were seven boot and shoe makers in Lynchford Road alone, as well as the businesses springing up in Camp, Peabody and Queen’s Roads nearby. Many of the traders who set up in Aldershot to serve the South Camp started to branch out into North Camp. Thomas White opened up a department store on the corner of Camp & Lynchford Roads selling everything from camp cooking equipment to cots and prams, clothes and furniture. The wooden structure was three storeys high, with a huge sign standing above the roof. This advertising strategy was used by some of the traders so that their business could be seen from right across the Camp. That is why there are such tall buildings on Lynchford Road today. 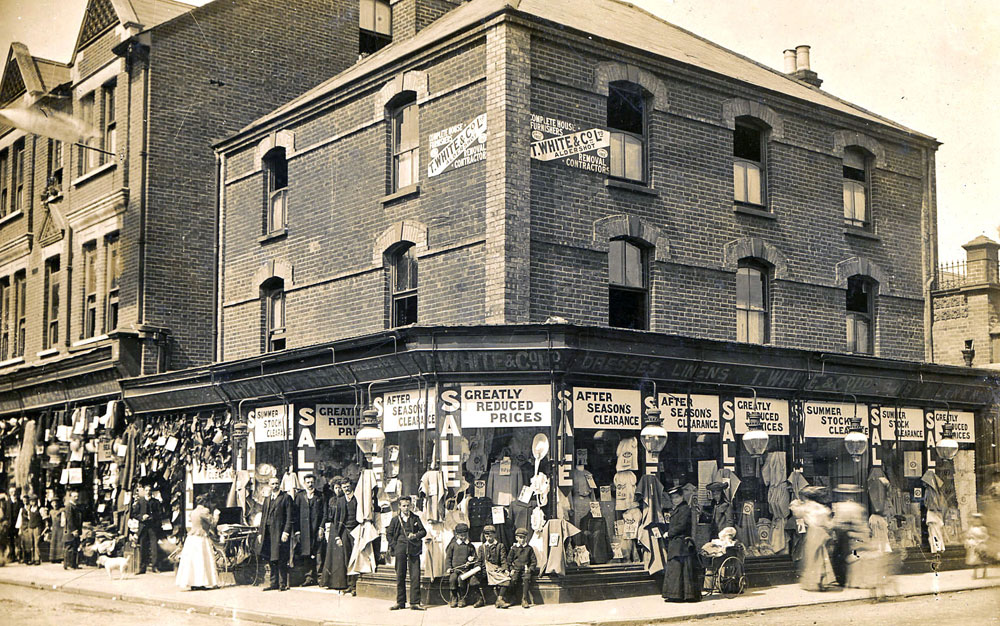 The three main beerhouses on Lynchford Road were The Barley Mow which was on the site of today’s North Camp Hotel, the Blacksmith’s Arms which was probably the forerunner of The Elephant & Castle and the Fir Tree, now incorporated within Kebur Garden Materials. 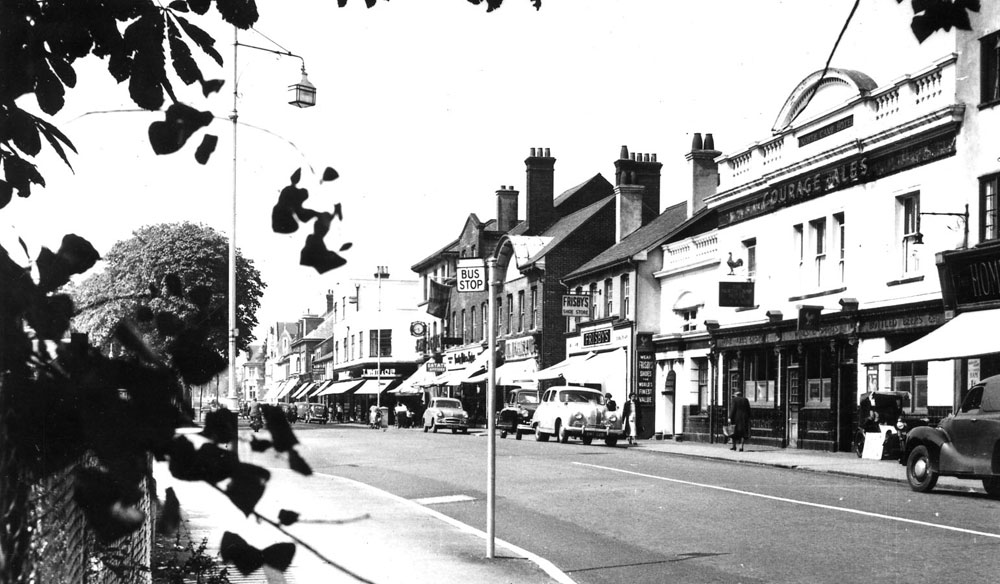 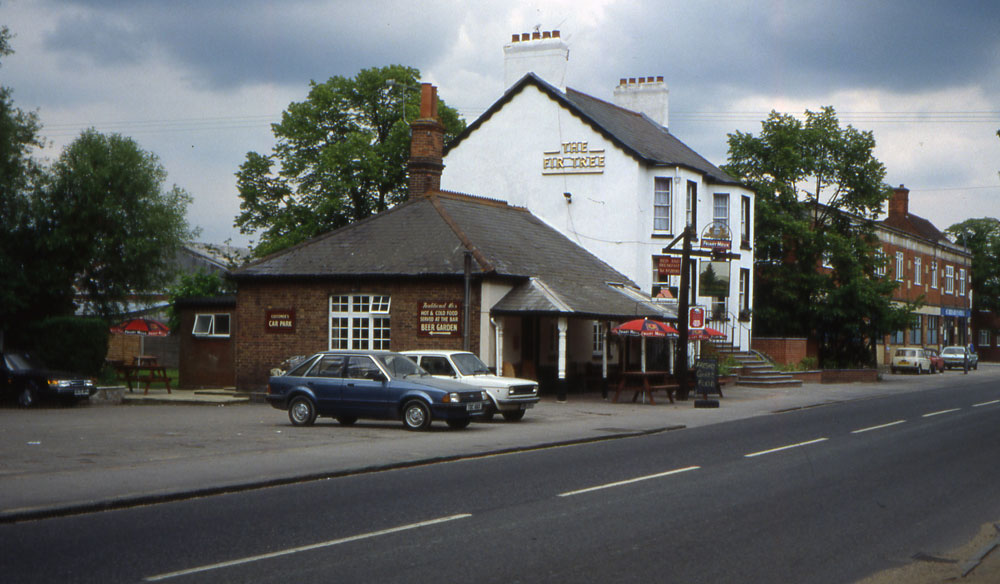 At one time there were three picture houses in North Camp. The earliest was The Empire Electric Theatre opened in 1911, opposite the end of Artillery Road. The next to open in 1912 was The Avenue Electric Theatre on the Eastern side of Camp Road, which has been replaced by a residential development named Theatre House. The Scala on the opposite side of the road was opened in 1927 and is now the Kingdom Hall for the Jehovah’s Witnesses. 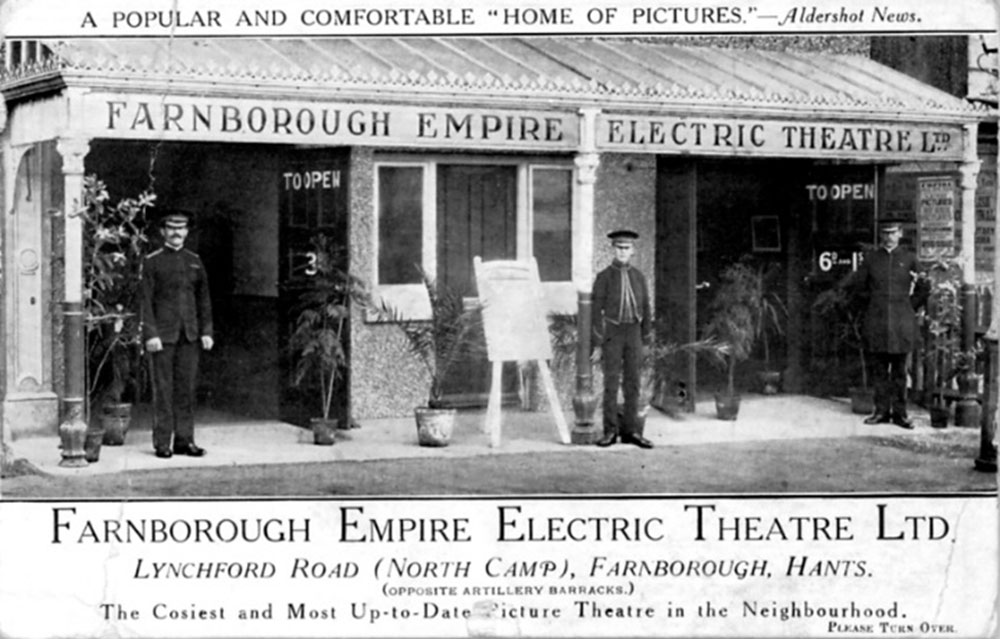 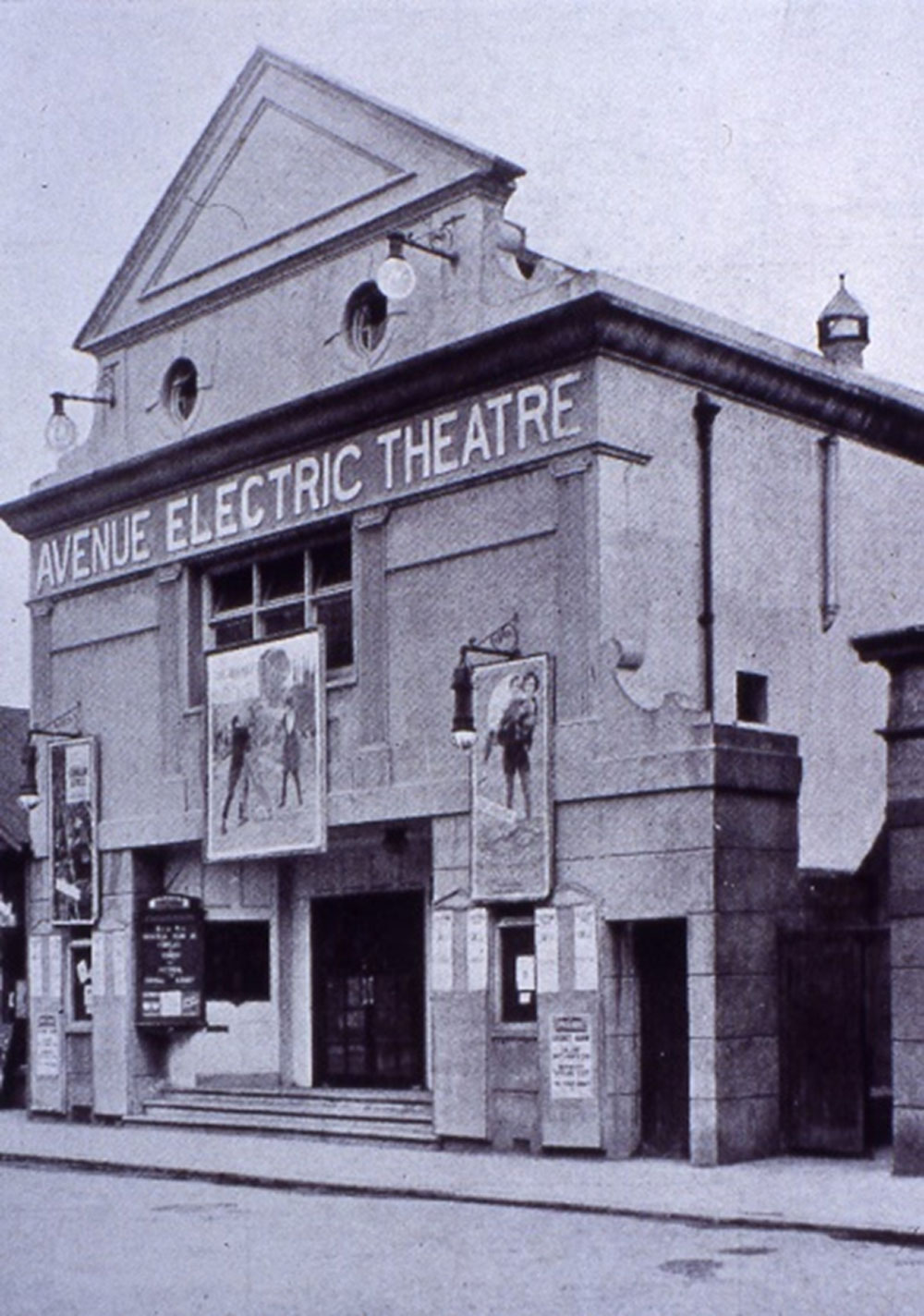 In the early days of the camp, initially made up of tents and wooden huts, there was nowhere for visiting dignitaries or senior army officers to stay. At the very outset, The Queens Hotel was erected at the junction of Lynchford Road and Farnborough Road. Originally constructed of wood, it had many rooms and excellent views over the whole camp, also it was in a prime position to view the Aldershot Camp Races, a rival in its day to the Epsom Races. Later it became brick clad, then it suffered a disastrous fire and was rebuilt in 1903 as the building we see today known as The Holiday Inn. However, it will always remain as The Queens in the heart of Farnborough people.

One of the questions most often asked is why does North Camp have a High Street with no shops on it? When laying out the roads in the area, it was thought that a High Street would attract all the shops. However, as most early businesses set up on Lynchford Road, a well established thoroughfare since the early 1800s, that never materialised. Only a very few corner shops were ever opened. 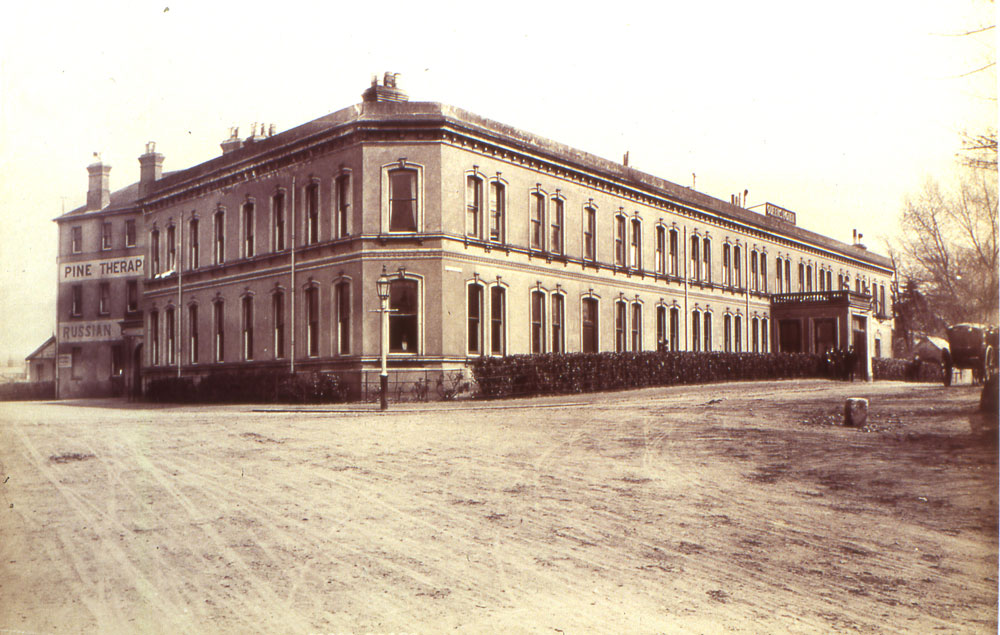 Many of the roads in the camp itself and the surrounding area were constructed from gravel and stone extracted from the many local gravel pits. Somerset, York, Guildford, Morris, Queens and Gravel Roads all show evidence of this by either dips in the roads or a variance of levels in the gardens.

Some of the earliest residential houses in North Camp were constructed in Alexandra Road mainly for officers from the Camp. For nearly 100 years, the military were the predominant influence in the village with thousands of army personnel stationed in the barracks on the Southern side of Lynchford Road. Because of the number and variety of shops and businesses, it became the main shopping centre for many miles around until Queensmead was constructed in the late 1950s in the centre of Farnborough. There were numerous bakers and butchers, and often the butcher would have his own slaughterhouse and smokehouse within his premises. All the major stores had branches, such as Woolworths, Co-op, Timothy Whites, Boots, Home & Colonial and The International Stores. Even today, inside the DEBRA shop on the corner of Camp Road, there are still the original decorative wall tiles used in the Home & Colonial hidden behind the wall coverings. All the major banks opened branches, there were two post offices and the first local telephone exchange was in Morris Road. Pharmacies, hairdressers, barbers, and many specialist stores sprung up, one pharmacy, Litchfields on the corner of Church Path and Lynchford Road, was still in business until the early 2010s, with many of the original shop furnishings from the 1890s still in place. Such was the growth of the area that in 1896, a Town Hall was erected in Alexandra Road, because it was considered to be the centre of commerce in Farnborough. 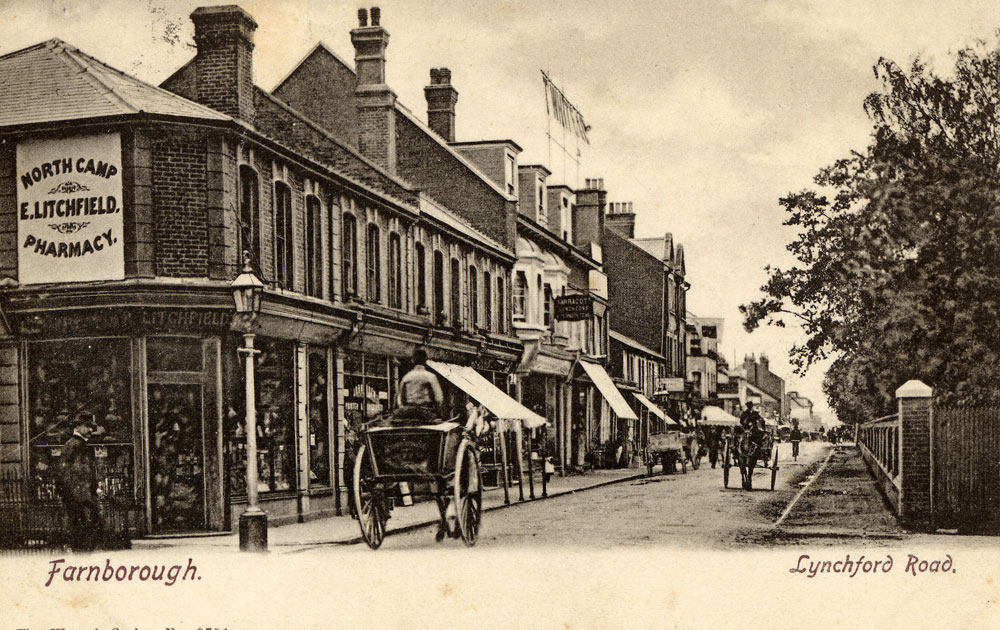 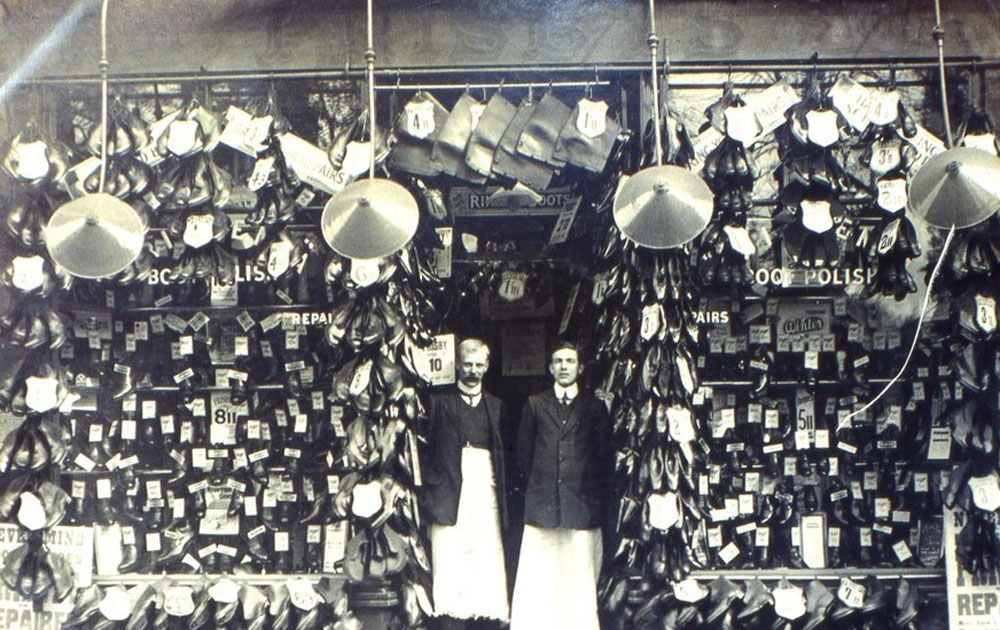 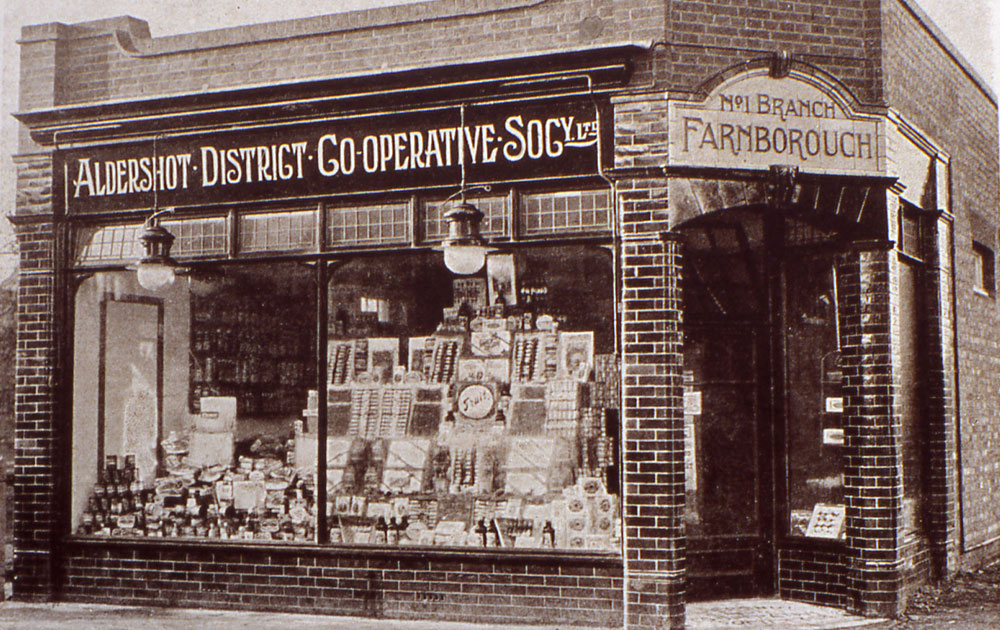 Spiritual needs were catered for in the construction of both St Mark’s Church, opposite the Town Hall, and The Weslyan Church on the corner of Alexandra and Lynchford Roads. Baptist Churches and a Catholic Church were on Queens Road and a small Catholic church was on the Queens Avenue. 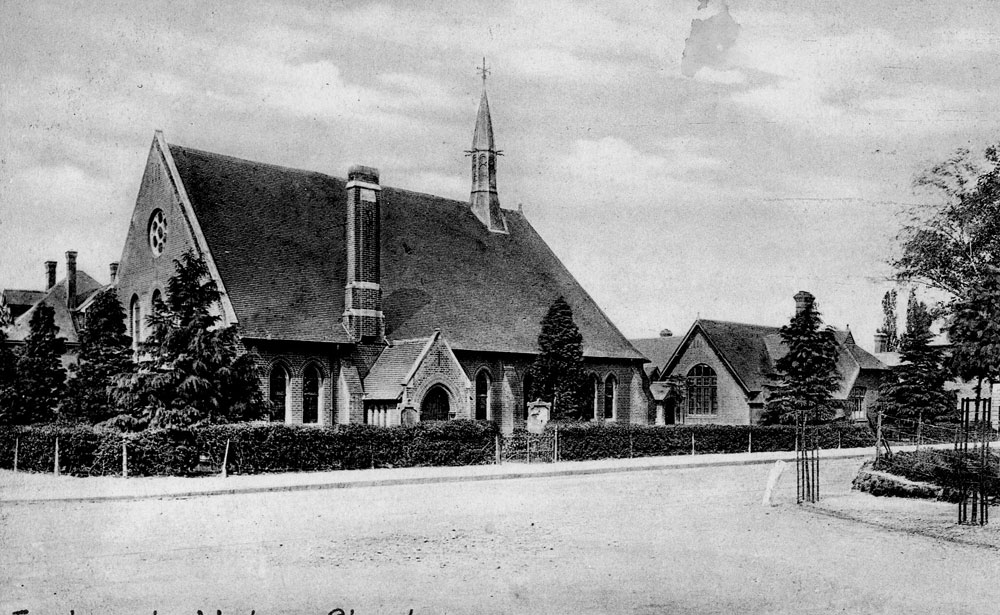 In the late 19th century a tin factory was constructed at the junction of Sherborne Road and Queens Road which later became part of the Salesian College. Today it has been replaced by a modern Catholic church.

Opposite the Southern end of Camp Road there is a piece of modern art on the grassed area before the crossing to Napier Gardens. This was constructed in 2007 in a public seating area and was designed to depict a gun carriage wheel placed on a tramway line. This represented the military connection and the fact that a horsedrawn tram on rails once travelled along Lynchford during the late 19th century. The tramway took passengers from Farnborough Main Line Railway Station, along the Farnborough Road, turned into Lynchford Road at the Queens Hotel and terminated at the Fir Tree Beerhouse near North Camp Station. 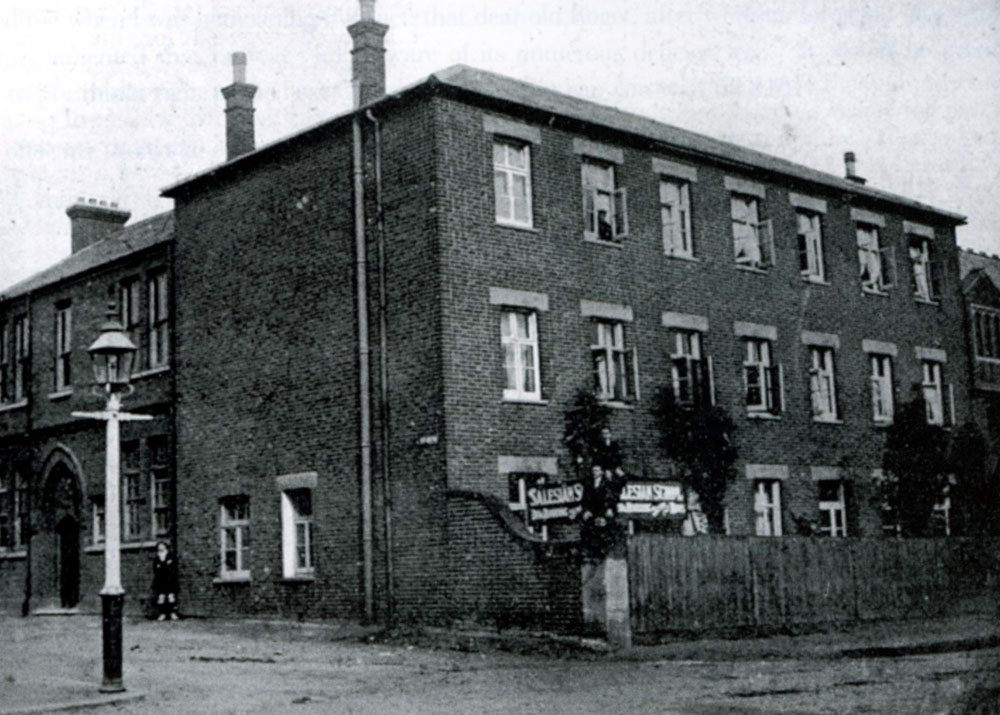 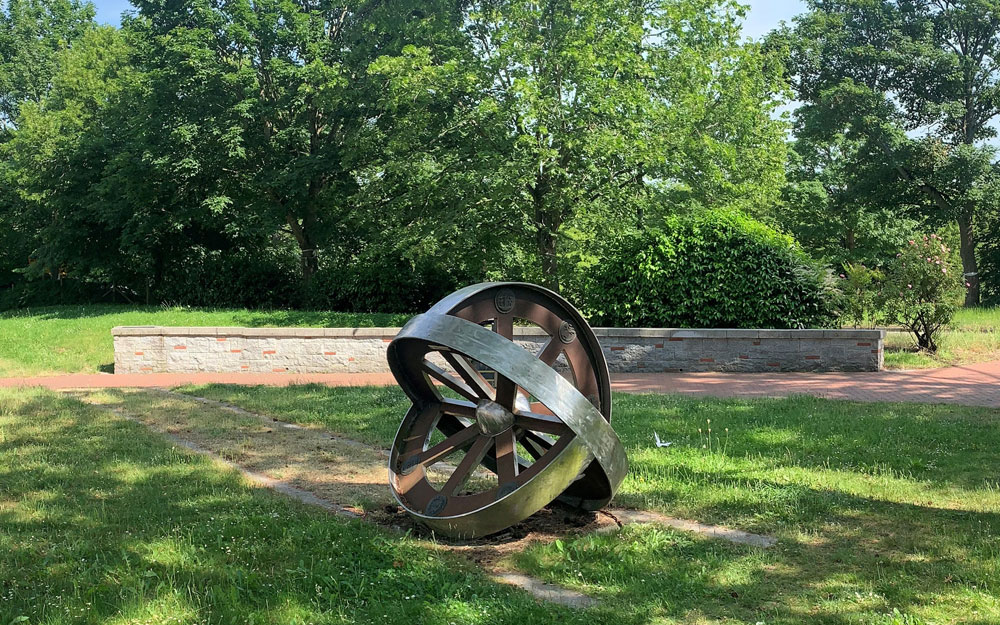 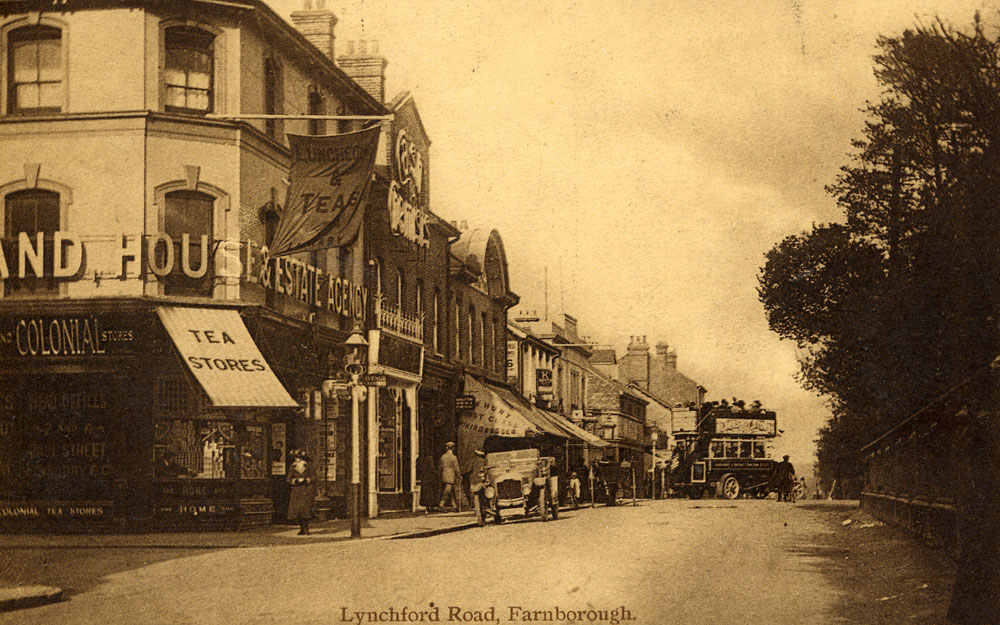 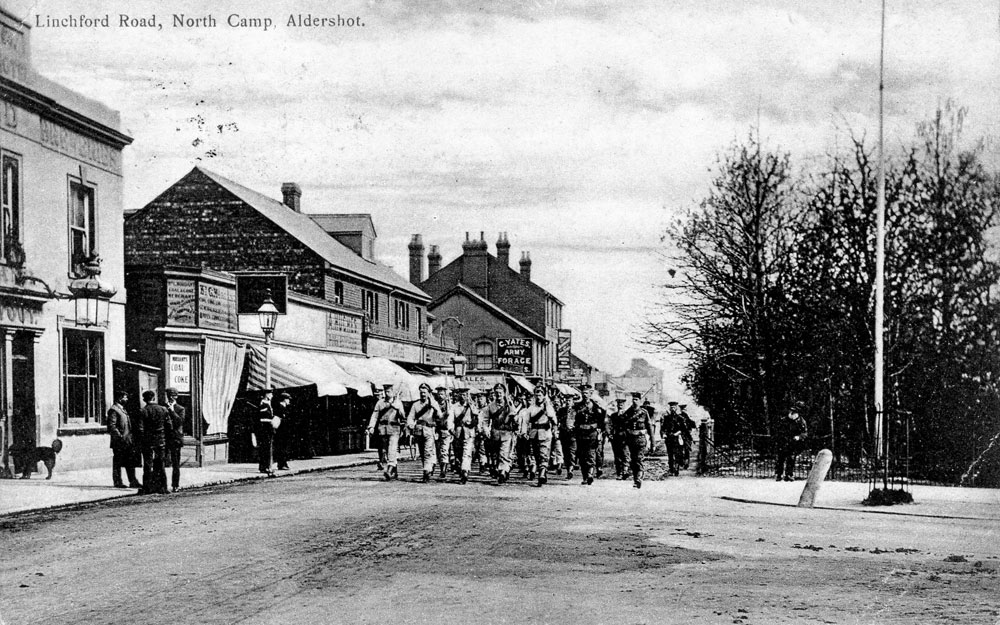 If you are interested in North Camp Village, become a member

Business Membership
Residential Membership
We use cookies on our website to give you the most relevant experience by remembering your preferences and repeat visits. By clicking “Accept All”, you consent to the use of ALL the cookies. However, you may visit "Cookie Settings" to provide a controlled consent.
Cookie SettingsAccept All
Manage consent

This website uses cookies to improve your experience while you navigate through the website. Out of these, the cookies that are categorized as necessary are stored on your browser as they are essential for the working of basic functionalities of the website. We also use third-party cookies that help us analyze and understand how you use this website. These cookies will be stored in your browser only with your consent. You also have the option to opt-out of these cookies. But opting out of some of these cookies may affect your browsing experience.
Necessary Always Enabled
Necessary cookies are absolutely essential for the website to function properly. These cookies ensure basic functionalities and security features of the website, anonymously.
Functional
Functional cookies help to perform certain functionalities like sharing the content of the website on social media platforms, collect feedbacks, and other third-party features.
Performance
Performance cookies are used to understand and analyze the key performance indexes of the website which helps in delivering a better user experience for the visitors.
Analytics
Analytical cookies are used to understand how visitors interact with the website. These cookies help provide information on metrics the number of visitors, bounce rate, traffic source, etc.
Advertisement
Advertisement cookies are used to provide visitors with relevant ads and marketing campaigns. These cookies track visitors across websites and collect information to provide customized ads.
Others
Other uncategorized cookies are those that are being analyzed and have not been classified into a category as yet.
SAVE & ACCEPT